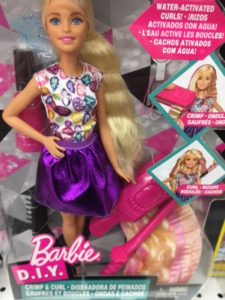 When my sisters and I were kids, my mother did not let us have Barbie dolls. Not a feminist by any stretch, she still understood that the images of women’s bodies presented by Barbie dolls were neither healthy nor realistic.

We, of course, felt differently. Many of our friends had Barbie dolls (and Ken and Skipper, not to mention the beautiful pink, plastic Barbie dream house and groovy convertible), so we found excuses to play at their houses rather than ours.

My own daughter went through a brief Barbie phase and, while I agreed with my mother, I thought making the doll forbidden would only make her seem all the more appealing, so for a short while we had a Barbie doll or two lying around our house.

According to a recent New Yorker article, the original Barbie was inspired by a “magnificently racy” German doll named Lilli, which Ruth Handler, the co-founder of Mattel, came across when travelling in Europe with her two children, Barbie and Ken. She brought some of the Lilli dolls back to the U.S. and set about producing an American version, naming it after her daughter.

Barbie was the world’s top selling “toy for girls” for more than half a century, with more than one billion dolls sold: nine out of ten American girls between three and ten years old own at least one.

New kid on the block

2001: Enter Bratz, described by Jill Lepore in the New Yorker article as having

“swollen heads, pouty lips, spindly limbs and chunky-heeled shoes. Their waists are barely wider than their necks. Their eyes and heads are so big and their noses so small that if it weren’t for their Penthouse makeup . . . and their come-hither clothes . . they’d look like emaciated babies.”

There are now countless versions of both Barbie and Bratz dolls available. Who could resist snow-kissed or sleepover party Bratz? For the more studious, there is study-abroad Bratz. For the musically inclined: music festival Bratz. The scariest to me is fierce fitness Bratz: how could anyone with such skinny legs support herself well enough to be fiercely fit?

Barbie, too, offers many choices: ballet-wishes Barbie, pizza chef Barbie, fashionista Barbie, rainbow mermaid Barbie or day to night Barbie (does that trim pink briefcase carry pyjamas and a toothbrush and maybe a condom?) to list just a few.

For all that Barbie has become a little more diverse in her body shape and size as well as her skin colour, both these lines of dolls continue to perpetuate old and unhealthy stereotypes of what women should look like, which brings me to the topic of gynaecological cosmetic surgery.

According to a 2017 article on the CBC news website, cosmetic gynaecology is on the rise in Canada.  Cosmetic surgeons interviewed for the article make the claim that cosmetic gynaecological procedures “can help women build confidence and resolve problems with sexual dysfunction.”

According to the director of a clinic offering such surgeries in Toronto, demand has increased fourfold since they started offering them about 10 years ago.

While surgery may be necessary or helpful for a woman who has incurred injury or damage as the result of child birth, other health issues or violence, the majority of women signing up for labiaplasty, vaginoplasty, labia puffing, hymenoplasty or other gynecological procedures appear to be doing so for strictly cosmetic reasons.

Dr. Nicole Todd is a Vancouver-based gynaecologist. She told CBC News that most of the patients who ask her about these surgeries are under 19. She notes:

“I do feel that there’s an increased focus on the appearance of genitals as this is pushed forward by increased access to images on the internet as well as in pornography. I feel as a medical community it behooves us to know and reassure women that the majority of them do fall well within normal limits.”

Shouldn’t we be changing the images of what makes a woman sexually desirable rather than creating images of desirability that can only be achieved surgically?

“I never wanted a Barbie or a Bratz doll until I discovered doll reconstruction.  What you do is erase the features of the doll with nail-polish remover and then remove the hair and make other body modifications. Then you give the doll a new face, new hair and new clothing. What I like about doll reconstruction is that I am in control . . . . The two dolls that I have reconstructed represent two parts of me . . . they represent my passions, my hopes and my feelings . . . [this is] my response to the toys made for my demographic.”

I provide a wide range of professional services to community organizations, lawyers and others working on the issue of violence against women and the law. Learn more...

For other work on these topics, see my Presentations and Publications.