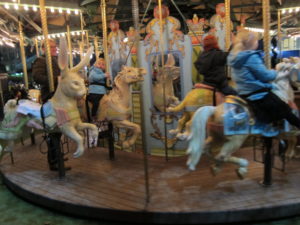 Mandi Gray’s comment after Ontario Superior Court Justice Dambrot upheld the appeal of Mustafa Ururyar, who had been found guilty of sexually assaulting her, is a simple yet powerful indictment of the criminal system’s response to sexual violence.

She went on to say:

“It’s been 2½ years since I was sexually assaulted and this sends a loud, clear message to other people who are sexually assaulted: Don’t bother reporting because you’re going to look at the next two, three years of your life being wrapped up in a system that does not really care about you.”

Her frustration is easy to understand: being involved in a criminal sexual assault case for many survivors feels a bit like being on a merry-go-round — on and on it goes with never an end in sight.

Change was in the air

In the highly publicized trial last year, now-retired Justice Zuker found Mr. Ururyar guilty of sexual assault. (Mandi Gray waived the publication ban available to her at the time so she could speak out about the sexual assault and criminal process.)

In his lengthy and strongly worded decision, Justice Zuker identified and dismissed many of the rape myths that all too often result in acquittals in sexual assault cases. Indeed, these rape myths keep many women from even reporting sexual assault to the police.

His decision came as a breath of fresh air to many of us, following as it did close on the heels of the decidedly lacking-in-fresh-air decision in the Jian Ghomeshi case.

We started to think perhaps a sea change was in the air; that perhaps the criminal courts would begin to understand the reality of sexual violence and its impact on survivors.

Ontario has seen much attention to sexual violence in recent years. In March 2015, the provincial government launched “It’s Never Okay: An Action Plan to Stop Sexual Violence and Harassment.” The plan opened with a strong message from Premier Kathleen Wynne about the misogyny that underpins sexual violence and harassment. It has supported many important initiatives intended to end this violence as well as to improve services to survivors.

Because of Jian Ghomeshi’s prominent place in the entertainment industry, his case generated considerable media coverage as well as public and political discussion about sexual violence and the appropriate criminal response to it.

A few other recent cases have attracted similar attention, perhaps most notably unrelated decisions by Justice Camp in Alberta and Justice Lenehan in Nova Scotia.

Rape myths or no rape myths?

But, it overturns Ururyar’s conviction, finding that Justice Zuker’s trial court decision to convict did not provide adequate reasons. In particular, wrote Justice Dambrot in his decision:

“the trial judge needed to do little more in his reasons than explain to the appellant [Mr. Ururyar] why his evidence was not believed, why his evidence did not raise a reasonable doubt and why the complainant’s evidence was believed. Unfortunately, despite the length of the judgment, it fails this test.”

He also wrote that Justice Zuker’s reasoning was “incomprehensible,” and faulted him for relying on “rape literature” (otherwise known as academic research about rape) and the trauma experienced by many rape survivors.

“I agree with the trial judge that we must be vigilant to reject pernicious stereotypical thinking about the behaviour of women. At the same time, we must not adopt pernicious assumptions about men and their tendency to rape.”

In other words, while claiming support for the notion that courtrooms must rid themselves of rape myths, Justice Dambrot overturns a decision that had done just that.

What next, if decisions that toss out rape myths are successfully appealed for appearing to be biased?

Emma Cunliffe, a professor at UBC’s Faculty of Law, says that the use of expert witnesses would help. She also suggests developing a body of reliably sourced research that would be available to all judges.

She and others see this case as proof, yet again, of the need for more education and training – for police, prosecutors, defence lawyers and judges. As Deepa Mattoo and Pam Hrick of the Barbra Schlifer Commemorative Clinic note in their OpEd in the Toronto Star:

“[this has] the potential to play an important role in creating a system that is alive to the needs and experiences of survivors, and one in which rape myths — or the manner in which they are addressed–have no role in the outcome of cases tried in Canadian courts.”

There is no doubt that these would be helpful initiatives. But more is needed. Training is only as good as the accountability that follows it. And training alone, no matter how good, cannot change deeply held and publicly supported attitudes about women and sexual violence.

Criminal court process needs to change so that survivors do not, as Ms Gray says, have to put their lives on hold for two or three or more years.

Supports for survivors, like Ontario’s pilot independent legal advice programs, are desperately needed across the country.

The strength of survivors

Disappointing as Justice Dombrot’s decision is, we can take some heart and inspiration from the determination of survivors like Ms Gray to know their own truth. Despite her clear frustration and anger at the decision, she also said:

“I never needed any man to tell me if I was raped or not. I still know what happened to me and it doesn’t matter what the legal system thinks.”

I provide a wide range of professional services to community organizations, lawyers and others working on the issue of violence against women and the law. Learn more...

For other work on these topics, see my Presentations and Publications.